adminPosted on 11/11/2015 Posted in CaptainsReport 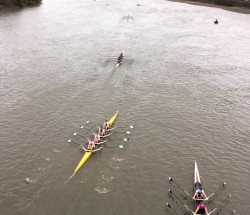 and with more coming up in the next month, we are in desperate need of towing volunteers.  With the squad sizes being as big as they are, it means that coaches are eager to have as many of their members race, which means that a large number of boats will be required for each event.  For eg, at York on 22 November, we plan to take in excess of 13 boats.  This will mean both trailers will be fully loaded and at the moment it is the same people who are being relied on.  If squads want to attend events it is imperative that we have the support of the coaches, senior rowers and parents in helping with the logistics, if we don’t then sadly squads will not be able to race, as happened earlier this month.   A towing pack with all relevant information is available and myself and James would be happy to speak with any prospective volunteers.

I am very happy to announce that we have a new supplier for our Club kit and that it is available on line through our website and also via http://www.kukrisports.co.uk/teamshop/warringtonrowingclubclubshop
The club shop carries the standard 13 week delivery, however, if members want the quicker 8 week, they just need to email Iain Wright with their name, address, order and contact number and he will process their order.
e: iain.wright@kukrisports.com
There is a size chart available on the website page but a note from Iain – the main clothing t-shirts and hoodies are a standard fit, I would say the jackets and track tops tend to be on the larger fit, I tend to drop down a size on the wet top tops.

Looking beyond November our thoughts will soon be turning towards Christmas and the Awards Evening on the 12th December, quickly followed by Christmas Eve 8’s.  Preparations are also underway for our annual Head Race in February 2016.  Look out for requests for volunteers.

Please take time to read the Performance Update on all our squads.  Thank you to the coaches, vice-captains for the time they donate to the club and for providing the information for the report.  Congratulations to all on the excellent results and keep up the good work.

The complexity of resource sharing among the various squads at Warrington can mean lots of competition for boats. We have attended local events at Runcorn Head (win for Ayesha & Ellie); Agecroft Head; Dee Autumn Head (wins for Lucy, Ellie and Rachel).  We planned two WJ16 quads at Dee Autumn Head and lost one to injuries and the second to the cancellation of the second half of that event.

At the British Senior Rowing Championships Lucy Glover and Ellie Davies won the Under-19 double sculls and Lucy Stanhope and Pippa Curran were third.

Ayesha Wooler, Lucy Stanhope, Lucy Glover and Pippa Curran raced in the Fours Head, 7 November where they came a magnificent 3rd.   Ellie Davies and Lucy Glover are both involved  in GB Junior Trials, 14 November.
Our next general event should be York Small Boats Head, 22 November.

Rowing in the J18 class at the Fours Head on 7 November, Tom Reed, Tom Carroll, Connor Guerin, Matt Baguley came 24th out of 38 crews with a time roughly half way between the fastest and the slowest. A good effort in a strong field.  Good tideway experience.

Tees:
Just two entrants for Tees, Matt Holmes and Phil Higginson as scullers. An enjoyable trip however no trophies.

Dee:
Just two crew entries – Mas D coxed four and Mas C quad.
The coxed four (Greg, Seb, Paul, Mike, cox Liz) overtook one crew and beat an IM3 coxed four however were not category winners.
The quad held off Grosvenor Mas C until about 2/3rds down the course and were also caught by their exceptional Mas D quad. Lots of room for rhythm and technique improvement at sculling.