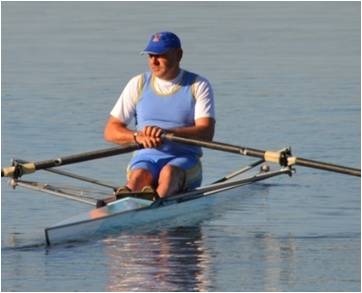 In rowing terms, I would describe myself as a typically, and at very best, average Masters Oarsman. So the obvious question, you’re probably all asking, is what the likes of me is doing competing at the annual Philippine International Regatta?

At first, you might think that this may seem to be a somewhat ‘random’ thing to do. However, I should explain that my wife is Filipina, who I met and married in Hong Kong during the time we were both working there, and we make frequent visits to the Philippines. On a previous trip to the Philippines, May 2015, I had arranged an outing with Manila Boat Club on the Pasig River, which runs through the City. This put the idea into my head as to when their regatta takes place, and what would be the possibility of me competing at the event?

After a couple of e-mail exchanges with Manila Boat Club Chairman, James Stratton, in which I did emphasise my rowing experience and their limitations, my request was forwarded to the Regatta Race Director, Quintin Pastrana, who explained that the Regatta, as well as being an Open Lightweight International Event, also offered Masters’ categories, and he was more than happy to invite me to the event.

The event itself take place on Paoay Lake located on the Northern tip of Luzon Island, approximately 500 kilometres North of Manila and 10 kilometres South of the provincial City of Laoag. The regatta is held here because the Pasig River through Manila, although offering almost 18km of rowable river, is heavily polluted and is also too narrow and meandering to provide for multi-lane racing.

I booked our flights for the trip, explaining to my wife that it was a treat for her birthday and that the holiday just ‘coincidently’ coincided with the dates of the regatta. After a few days stopover in Hong Kong, to catch up with some old friends, we flew onto Manila and then took a one hour domestic flight up to Laoag. To have taken the same trip by bus would have been an arduous 15 hour plus journey.

The day after our arrival in Paoay was an open practice day. I was told to report to coach Nic Jasmin from the Philippine Rowing Association. He welcomed me to the event and said I could choose any of the few singles available to take out on the water.

With my weight being just over 100kgs, I wasn’t optimistic of finding a suitable boat, expecting there to be only Lightweight boats available. I was pleasantly surprised therefore, to find there was an 80-85kg single scull which I was able to use. Even more surprising was that I found it an easier boat to scull that the heavy old Aylings 1x I use at Warrington. 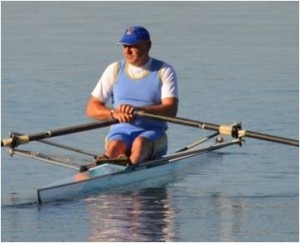 After pottering around in the single, I noticed a Double Scull preparing to boat onto the water. I assumed that this was another crew coming out to practice. However, I was waved back into the landing stage where I was invited to swap into the Double. It transpired that my new partner was from the Philippine National Squad, Nestor ‘Andex’ Cordova who just happened to be a triple South East Asian Games Gold medallist, and we proceeded to have a quick blast up and down the lake.

The final draw for the event took place that evening, with The Philippines National Squad Malaysian National Squad and Malaysian University Crews represented. A squad from Sri Lanka had scratched at the eleventh hour. I was given an option to compete in the Open Singles event, which I nervously accepted. I was also entered into the Masters Double Sculls event in which I was paired up with race director Quintin Pastrana, representing Manila Boat Club.

The Open Singles was the first event to take place on race day. A scheduled 7am start time, with temperatures already pushing above 30oC. Conditions on the lake were generally calm, in fact we were lucky with the weather overall, considering that only a week before a Typhoon Koppu had swept through the Country.

I was drawn against scullers, of around college age, from the Philippine and Malaysian National Lightweight squads for the 1000 metre course. A tough ask for a lumbering Masters D.Novice Sculler. After my usual mediocre start, I battled through the choppy waters of first third of the race before settling into a comfortable rhythm in calmer more sheltered waters for the last part of the race but was comfortably, and not unexpectedly, beaten.

In the master’s 2x event, our Warrington Rowing Club and Manila Boat Club composite were drawn against the Philippine Rowing Associations’ coach Nic Jasmin and one of his protégés, Faivo Bartolome, In the final, and despite some wayward steering issues from both crews we managed to take victory by around one length in a hard fought and keenly contested race. 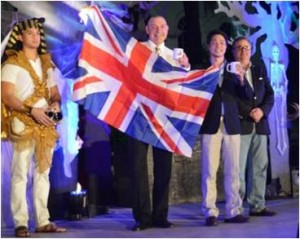 In the evening, all competitors were bussed into the City of Laoag for the Presentation Ceremony. Expecting to be taken to a suitable hall, instead, were escorted into the Main City Square and directed to rows of VIP seats alongside, the bizarre sight of an ongoing Halloween Parade with a huge cheering crowd of onlookers.

Following the conclusion of the Parade, the Race Director, Quintin Pastrana, was invited onto the adjacent stage where the awards were presented by him and the Grandson of late former Philippine President Ferdinand Marcos. I was presented with my winner’s pot, and had a Union Flag to hand to celebrate the victory, which was generously cheered and applauded by the gathered crowd.

Our final day in Paoay was taken up with some sightseeing. Faivo Bartolome, one of my opposition in the master’s double race, had very kindly offered to take us on a tour of the Illocos Norte region. In fact it must be said at this point, that the people of the Philippines are unkindly caricatured and receive a disproportional level of negative press in the UK whereas in fact, in my own opinion, they are a Nation of the friendliest, most helpful and welcoming people I have ever met.

For any club, crews or individuals who might be interested, it was discussed that next regatta could be moved to a new date and a new venue. The International Regatta would still be aimed specifically at Lightweight crews, with the hope that more Master’s events could be added.

The proposal, (TBC), is to hold the event in late January 2017, at Caliraya Lake, Laguna, around a 2-hour drive South of Metro Manila. For enquiries please contact; Quintin Pastrana – qp2@georgetown.edu

To get there, the route I chose to take was from Manchester, via Dubai, to Hong Kong with Emirates Airlines. From Hong Kong I flew onto Manila and then took a domestic flight up to Laoag, both with Cebu Pacific. Generally, and for some inexplicable reason, unless you take an arduous, lengthy and time consuming route, it can actually be less expensive to fly via Hong Kong to Manila than it is to fly directly to Manila. Plus, you could, as I did, take the opportunity of a stopover in Hong Kong.