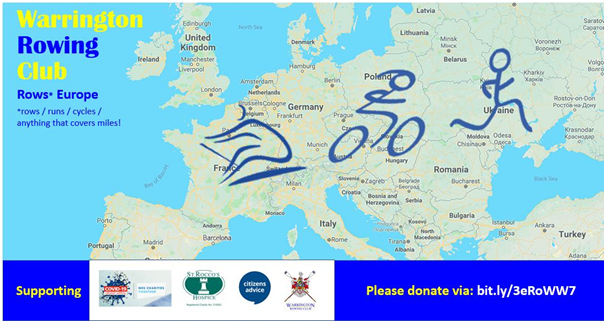 2020 has definitely been the year that never was. It began with terrible winter weather, which consisted of a different storm almost every weekend, leading to the cancellation of all events scheduled to take place in the north west during the first three months of the year. We had to take the difficult decision to cancel our own event, Head of the Mersey, in February due to storms which seemed more commonplace in the middle of the Atlantic  than on the banks of the Mersey in the heart of Warrington.

Then as march rolled in, fears of a global pandemic grew ever greater as the spread of Coronavirus had reached our shores. A national lockdown was imposed, British rowing cancelled all events for the next three months and we had to shut the doors of our rowing club to all members. Life changed in a way no one could have ever envisaged….

But that didn’t stop us!

We distributed the club ergs among our squads so they could use them at home and swapped training in person at the club to training from the comfort of our own homes with the help of Zoom. Club circuits, squad training and socials were all held virtually and proved to be a massive success in helping to keep the club running in a remote form.

However, we came up with another idea…..

Since the end of April, the members of WRC have been quietly rowing, running, cycling and walking their way around Europe, virtually of course. in order to raise money for NHS Charities Together, St Rocco’s Hospice and the Warrington branch of Citizens advice, as well as our rowing club. With the cancellation of our two biggest fundraisers this year, we had to get creative with how we could still raise funds for the rowing club while all confined to our homes, but we also wanted to raise money for vital charities that are doing incredible work in the midst of a global pandemic and also aren’t able to raise much needed funds through their usual methods as a result of the virus.

The concept is simple: members go for a walk, run, bike ride or a row on the erg and record whatever distance they cover. Everyone’s distances are added together to produce a total that increases every time a member records a new distance. Below you can find how we’ve been getting on over the past few months and how much money we’ve raised so far. Lockdown might have eased slightly and we might be back training on the water in a limited capacity, but we a by no means back to business as usual, so our row around Europe continues until we virtually make our way back to the club.

In the first few days of the fundraiser going live at the end of April, we got off to a flying start and steamed our way straight to Paris, a distance of over 800 KM. By this point, we had quickly raised £240 which was an excellent start. From there, we headed north, up through Belgium and the Netherlands and then across into Germany. Then we headed up towards Denmark.

By the time we reached Denmark and were close to reaching Copenhagen, we were on a total of 2,839,024 metres! A huge distance achieved in just a matter of days. By this point we had raised £396.00 which was fantastic!

After Denmark, we headed to the very top of Europe, crossing over into Sweden and heading up the south west coast towards the capital of Norway, Oslo. Once in Norway, we headed to the west coast and made our way up to the top of the country. Once we reached the very top of Europe, we had covered a total distance of 6472 KM and over halfway to our target of raising £1000.

We had someone on our Facebook page suggest we go to Stockholm, so that’s where we headed next. We traveled down through Finland towards Helsinki before heading back up the west coast of Finland towards the Sweden border. Once we were back in Sweden again, we headed down to Stockholm by which point we had covered a HUGE 9,466,344 metres (approx. 9466 KM). We had raised £816.00 which put us just 19% away from our target.

Since Stockholm, we have traveled a further 4,515 KM into Eastern Europe. We have traveled through Berlin, Warsaw, Vilnius (capital of Lithuania), Riga and Tallinn before heading down the west of Europe to Minsk and Kiev, finally landing in the capital of Moldova, Chisinau! We are on a grand total of 13,980,086 metres (13,981 km approx.) which is amazing and we’ve raised a total of £861.00! We’re not finished yet though!